Vienna is to Austria what Rome is to Italy. Known to be the National capital of the country, Vienna is the largest city and is home to approximately 1.9 million people. A city so mesmerising that it beautifully nurtures its people while maintaining its dignity, alluringly watering its plants of culture. Dating back to the 20th century, the city was seen to host the largest number of German speaking individuals and more inhabitants before the disaster of WWI. Currently, it is the second largest German speaking city after Berlin which still remains at number 1. If you’re a history buff, you might already be aware of the fact that Vienna is home to numerous international organisations, some fine examples of which include the United Nations, OPEC and OCSE. Nestled in the eastern part of Austria, Vienna shares its beauty with Czech Republic, Slovakia and Hungary which are some of the most tourist attracting places in the world. In the year 2001, Vienna was declared to be a World Heritage Site by UNESCO. The city of music features baroque streetscapes and jaw-dropping palaces. Wrapped amidst the foothills of the Alps and the serene Carpathians, Vienna has undergone a lot of historical incarnations yet it is amongst one of the least destructed pride of rustic Western European capital. The skyline dominated by the zenith of St. Stephen’s Cathedral and by the gigantic Ferris wheel in the Prater, Vienna is so beautiful that it can not be summed up in any amount of word. 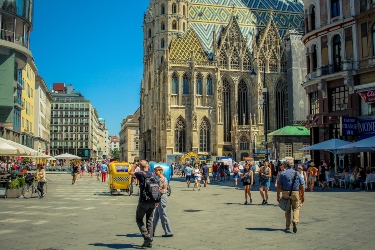 If you’re a foodie, you’re probably already aware of the fine gourmet and the wine that Vienna produces. With the regional culinary that sometimes stand in strong competition with the Italian or London cuisine, you might be able to taste some of the most distinctive dishes from starters to dessert. Some of the must try dishes in the city are- Wiener Schnitzel for all those who love to keep it spicy. The Sachertorte if you have a sweet tooth and want to witness the best of the city, make sure to experience the dense chocolate melting with the warmth of your mouth with this thin layer of sponged bread topped with the goodness of apricot.

The best time to visit the city is between April to May and September-October that is known to be the shoulder season when the accommodation rates are cheaper and so are the air fares. The hustle-bustle of the tourists are not too much during the shoulder season which gives the travellers a perfect moment to cherish the raw beauty possessed by the city. June to August is the peak summer month which marks a high rate in the arrival of tourists all around the world. The hotels are hard to get during these months which is why they’re over expensive, asking every traveller to step a bit out of their budget.