In the Funnark county of Norway, between Narvik and Hammerfest lies a small municipality of Tromso which is known for its impeccable architecture, rich history and an enthralling culture. Squatting in the northern part of the country, the municipality is known to be the 12th largest in the country. What makes the city unique is the fact that it is situated right above the island of Tromsøya, ringed by the most active mountain peaks such as Tromsdalstinden in the east. Norway has always been on the top of the itinerary of every traveller who wants to unfold the raw beauty of nature. Personally speaking, we find no better place than Tromso to spend our serene days in. 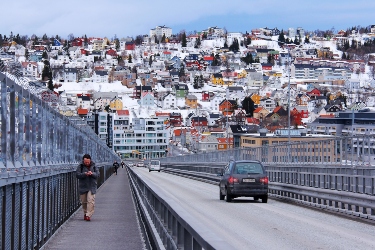 During the winters when the city is covered with the beautiful snowflakes, the colours of the street lighten up the mood of every traveller that witnesses it. If you are a fan of the Northern light, you can experience it in Tromso during the winter months. The city might not have as much spotlight as other cities of Europe such as London, Rome and Paris does but Tromso has proved itself to be quite a catch when it comes to attracting true nature lovers. An ideal day out can entertain you in their fishing ports. 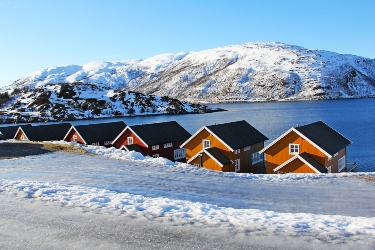 Amongst the numerous other things that will dazzle you, the most supreme of them still remains the Norwegian cuisine, although the food is diversified and worth drooling for, it is of no surprise that eateries are quite pricey in the country due to the cranked yo labour cost. Sea food is the primary attraction over here, from smoked tuna garnished with herbs to bacalao, we recommend it all. Sushi lovers can give a try to Ra Sushi which is known to serve the best and an array of sushi in Tromso.

If you’re a music enthusiast, every year during the months of January/February the city hosts a Northern Lights Festival which lures symphonic orchestras and artists from all around the world. If you want to experience the midnight sun, the best time to visit the city is during mid May to mid July.

Later winter to early spring or the summertime is the best time to pay a visit to Tromso, you can go hiking and trailing during the summer months when the sun is up usually longer than any other time of the month. 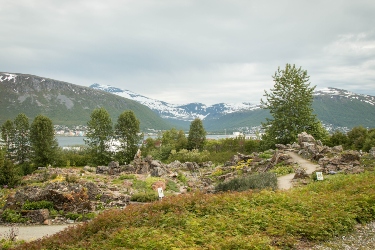 For all those who are lured by the unique flora, his botanical garden in the northern part of the country is a must visit. Although the city is comparatively colder and faces snowfall for most of the time, the flowering starts somewhere around May blessing the eyes of the visitors with soothing purple coloured saxifrage, yellow fusion plants, numerous flower bulbs and pasque flowers. Subdivided into 25 different sub sections, the garden specifically displays the different flowers growing during different seasons. The flowering finally stops when the snow marks its arrival: in the month of October. 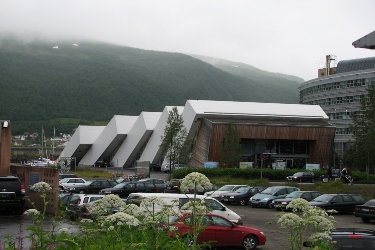 This museum of Tromso, Polaria is dedicated to the arctic and is situated just 10 minutes walk away from the centre of the city. The exterior looks a lot like the toppling set of the dominoes, the place has been crafted in a manner so that it resembles the ice floes. The place also provides knowledgeable facts like how climate change is affecting the Arctic wildlife. 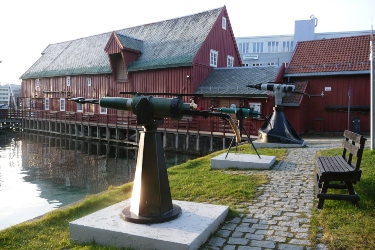 History buffs simply can’t get enough of the polar museum of Tromso, featuring centuries old culture and history. The museum tells about the discovery and the first settlement to the whaling industry. The exhibits of the museum include the information about the renowned Fridtjof Nansen, Roald Amundsen. The museum has a new exhibit which is known as Polar Nightwhich features the world of wildlife during the Winter months. 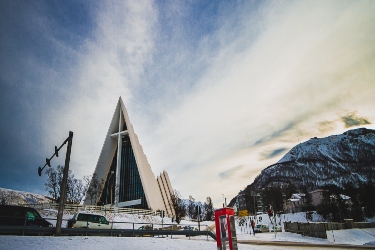 The masterpiece was crafted by none other than Jan Inge Hovig in 1965 is a striking example of the modern architecture in the country. Situated in a close proximity to the Tromsø Bridge, this cathedral ties the natives in the divine worship and brings them all under one roof. The cathedral is huge and is visible from the airport as well, the most prominent feature of the cathedral is the 1500 square foot glass mosaic crafted by Victor Sparre.

Home to the largest planetarium of the country, the museum will amaze you with a close up look of the Northern lights, displayed on the huge screen. Moreover, one can also get a chance to explore the phenomena and get the answers to all their cosmic related questions. It would be of no shock to say that if you’re missing out on this museum, you’re missing out the best thing that the country has to offer. 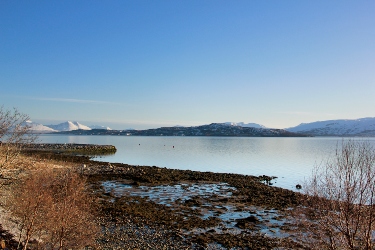 This small village is tucked in the Tromso municipality on the mainland and is situated approximately 10 kms away from the vibrant city of Tromso. A natural setting presenting nature, beautiful dusk and dawn at its best, Movik is known to entertain its visitors in the most serene way possible. A day trip from Tromso to Movik would be completely worthy if you are looking to spend some quality time with your loved ones. 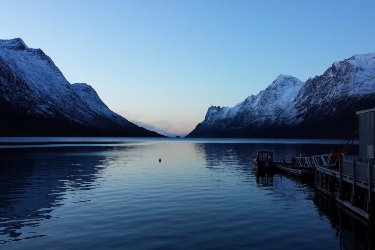 At a distance of 15 kms in the western direction of the city, sits a beautiful village with a magnificent setting known as Ersfjordbotn. A half an hour ride would lead you to this village with many wooden cabins that make your stays more amazing. We wouldn’t be dating we’re hyping but if heaven had a face, this would be it. An ideal day out would be including exploring the traditional side of the village while enjoying the resources from Tromso. 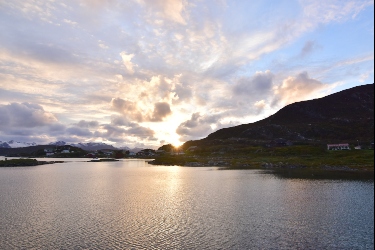 White sandy beaches and the acne is view makes this fishing village an ideal one. At a distance of 36 kms from Tromso is situated the magical village which also covers the island of the same name. The first ‘time free zone’ place on this earth, when the sun never goes down, you can find children playing, visiting schools and painting at 2 AM. 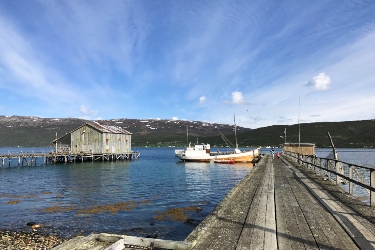 We can try all we want to but to put the picturesque beauty of the village into words would still not be able to define even half of how magnificent the village is. Situated at a distance of 58 kms from Tromso, Hansnes is the most alluring destination of the country. The entire location seems kind of dreamy with the snow and the cabin. 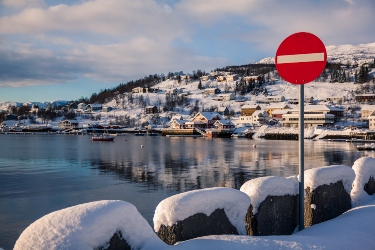 Situated right in the arms of Ullsfjord and Lyngen (fjord), Lyngseidet is an underrated village which is a must-visit if you love to spend some quality time alone or with your loved ones. If you’re an adventure lover, you should experience the winter sports such as Snowmobile safari, skiing is a plus if you’re visiting the village. 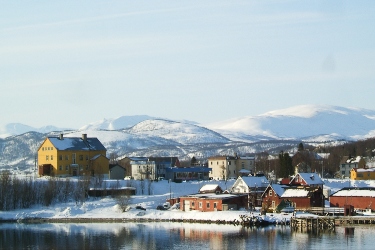 We have all heard about the places in fairyland but have we witnessed it? If not then Givostad is the next place that you should explore. Situated on the island of Senja, this luring village is bound to give you a time travel in the past with its baroque buildings and laid-back homes. 20 km in the northern direction of this bridge would give you a chance to click instagramable pictures on the Gisund Bridge.

Situated at a distance of 56 kms from the city of Tromso, Furuflaten village is quite a dreamy one. The tall mountains with the rising sun and the serene lake flowing by, birds chirping while you take a stroll through the smooth roads, sounds amazing, doesn’t it? The ethereal beauty of the village is the only reason why it attracts a lot of tourists every year. 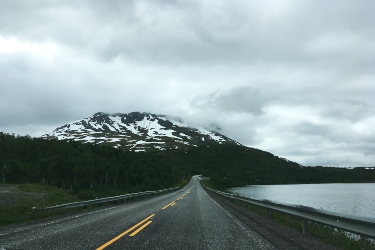 If you are visiting Tromso but missing out on Nordkjosbotn, you better have a good reason for it. Close proximity to the lively city of Tromso is what makes this village a very preferable one for the travellers, the wooden cabin with glass window gives the visitors a chance to lurk into nature from the bed itself. An ideal day out would include visiting the Nordkjosbotn Church, situated in the village. If you’re a beer fan, do not forget to visit Mack Brewery.