The airport was officially opened in October 1956 and is situated north of Rotterdam and southeast of The Hague and is easily accessible through all methods of transportation. Due to The Hague being the home of the Dutch government and other internationally significant institutions like the International Criminal Court, this airport is frequently used by State and military aircraft. The airport has only one terminal.

The terminal has a cash machine which can be found at the GWK Travelex Office in the transit hall before the security checkpoint. A Bureau de Change service is also available at the airport.

For food, there is an espresso bar, a sandwich kiosk, a self-service buffet and bar in the departures area, an eatery in the public hall and an outdoor terrace bar. 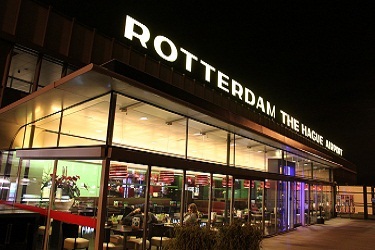 The airport also promises an extensive shopping experience with its selection of products and duty-free items available for passengers in the Rotterdam Airport Shop which is located in the departures lounge. News vendors selling books and magazines are also present in the public hall.

There are left-luggage lockers in the public hall and a trolley service is also available. Some of the other facilities provided by Rotterdam The Hague Airport includes a fully equipped baby care room and an airport lounge. An extremely unique feature of this airport is the Baken which is located on the first floor of the departure hall. Used extensively for conferences and business, it can seat up to 100 people and is equipped with audio-visual materials.

The airport is host to several flying clubs, a skydiving club and a flight training school.

When you arrive at the Rotterdam The Hague Airport from a long and tiring journey, the last thing you need is a worrisome ride to your hotel. At nights when there is no public transportation, when you have a lot of luggage, and when you want to avoid the hustle and bustle of public taxis, here is where Rydeu steps in.

Rydeu provides a one-step solution to all your problems with its easy and hassle-free experience. A diverse fleet of options varying to your budget, Rydeu offers safety and comfort from all your transfers out of the airport.

With fixed prices and no hidden costs, transparency between the customer and Rydeu is maintained. As customer satisfaction is paramount, a 24/7 customer service is also available to solve any problem which arises. Rydeu looks forward to seeing you in Rotterdam.