Developed as a fishing village in 1328, Rotterdam is now the second largest city in the Netherlands. Rich with breath-taking architecture and modern art, it is the biggest and busiest port in Europe. A modern metropolis, the city’s skyline shimmers with colossal skyscrapers unlike other cities in the country. 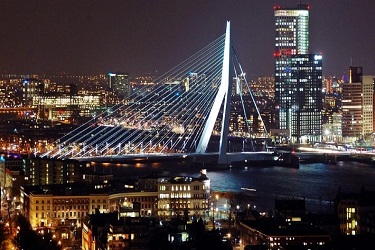 One third of Rotterdam and the city centre was completely destroyed by the Germans during the Second World War yet the city rose from its ashes in the subsequent years. It was completely rebuilt, more brilliant than before. With inputs from great architects like Piano, Foster, and Koolhaas, city planning was done in such a way to retain space towards the river. 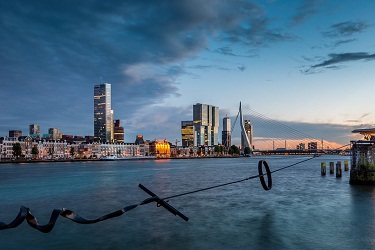 Rotterdam is a city with cutting-edge designs and continuous innovation. Tourists come from all over the world to marvel at the unique urban design ranging from the docklands at Kop van Zuid, the grand Centraal Station redevelopment; the iconic Erasmus Bridge, and the unique Markthal. Exploration in Rotterdam is both eye-opening and memorable.

From hippie and trendy cafes to the grandiose magnificent traditional cafes, Rotterdam boasts of its huge variety of eating corners which act as a functional working space along with quaint hang-out places. Where it was home to the brilliant Man Met Brill, the only coffee roastery in the city, now it has twelve such famous eateries.

A favourite shopping place for high end shoppers, there are numerous shopping venues scattered in the city. Where the well-known street Kruiskade is popular for its upscale retailers like Michael Kors and Calvin Klein, Markthal hosts a lot of small retailers. Yet Zuidplein remains the main shopping area with exhibitions, concerts, shows among more.

A casual sight beholds locals involved in a lot of water-related action. Rotterdam promises a day of fun and excitement and visitors are advised to board a ferry to visit nearby destinations including Dordrecht and Kinderdijk.

Considered the European Capital of Culture, the city has its own orchestra called the Rotterdam Philharmonic. There are numerous theatres and cinemas including  Cinerama which guarantee a magnificent time. A visit here is definitely an ideal proposition!