Paris and Nantes go hand-in-hand. These two wonderful cities, tucked in the glorious country of France attract tourists from all over the world. The sixth-largest in France, Nantes is a colorful university town replete with an intersection of history and modernity. Situated in Loire-Atlantique on the Loire, approximately 50 km from the Atlantic coast, Nantes offers its visitors a vibrant blend of art, culture, and fun.  A town that looks straight out of a postcard, Nantes dazzles everyone. Plan a memorable day trip from Paris to Nantes with the extraordinary services of Rydeu. Traveling by a private car makes your journey ten times more memorable and wonderful. If you want a private car transfer from Paris to Nantes with complete comfort and no hassles, choose Rydeu.

Distance between Paris and Nantes – 238 miles 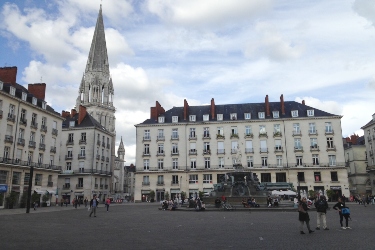 The sixth-largest in France, Nantes is a colorful university town replete with an intersection of history and modernity. Situated in Loire-Atlantique on the Loire, approximately 50 km from the Atlantic coast, Nantes offers its visitors a vibrant blend of art, culture and fun. Visit the grand Machines of the Isle, an amusement park visited by tourists of all ages. Inspired by the works of Jules Verne and Leonardo da Vinci, this unique park is considered a whole universe in itself. An amalgamation of art, architecture and cuisine, Île de Nantes is an island neighbourhood which is beautifully surrounded by the Loire River. Full of bar terraces, impressive installations and wide paths to stroll on with your loved ones, this section of the city has a lot to offer. If you’re interested in relaxing and exploring the countryside, discover some of France’s most stunning castles at the Château country.