No pure touristy soul would want to miss out on exploring the enigmatic city of Ghent in Belgium, if they are visiting the city of Paris. The best part about travelling to Ghent from Paris is the route between the two cities. Should you choose to travel by road, which we really suggest that you do, you will get a chance to witness a rare beauty of the world. Surrounded by the best of nature, the route from Paris to Ghent is destined to heal the hearts, minds and souls of the tourists and travellers.

Distance between Paris and Ghent - 297 kms 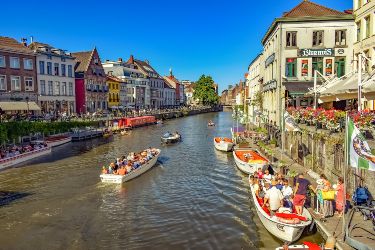 You are not an avid tourist or a pure traveller at heart, if you’re visiting places that are only listed on the map. Ghent is an underrated place situated in close proximity to Brussels, which is known for its huge public squares and some of the best marketplaces found in Belgium. One of the oldest cities, Ghent is the historic capital of Flanders. The city was powerful, economically strong and well built than most of the cities in the world.The marvelous medieval and classical architecture contrasts beautifully with large concrete post-industrial areas. A visit here guarantees a memorable time, with fantastic canal-side architecture, a vast variety of bars and fine restaurants. Make sure to include this breath-taking place in your itinerary for a timeless experience to Belgium.