Also referred to as Gardermoen airport, this is the primary airport serving the city of Oslo, the capital of Norway and the most populous city in the country. The airport is considered to be a hub for Norwegian Air Shuttle, Widerøe and Scandinavian Airlines. Connecting to 26 domestic airlines and 155 international destinations. The year 2019 marked the arrival of 28.6 million passengers making it the second most visited airport in the Nordic countries.
Situated at a distance of 35 kms in the northeastern direction from the heart of the city in the municipality of Ullensaker in Gardermoen. There are two parallel roughly north-south runways and 71 aircraft stands out of which 50 aircraft stands have jet bridges. The airport is linked to the city centre for the convenience of the travellers via a train, serving the Gardermoen line and the number of passengers using the public transport is approximately around 70%. Dating back to 1940 when the airport was initially used by the Norwegian Army, contemporarily it is used as one of the most preferable airports by the passengers. 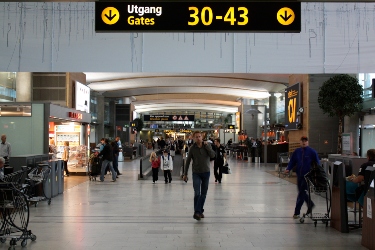 The airport boasts a single terminal with two runways and covers an area of 13 square kilometers. There are a total of 70 gates on the single huge terminal, the domestic gates are situated in the North pier which are gates A, B and gate C on the other hand, the international flights are dealt in the north as well as west pier which are gates D and E respectively. The facility of the airport is endless, there are a total of 20 restaurants to satisfy you with the regional food and duty free shops to grab some souvenirs from. The airport also has a VIP lounge for the Royal family of Norway and the government.