The second busiest in Germany, and the ninth-busiest airport in Europe, Munich airport is located approximately 29 kilometers northeast of Munich. After plans were made for expansion, and later for completely moving Munich's oldest airport "Munich-Riem Airport" to a different location, the construction of the Munich airport began in November, 1980. On the 16th of May, 1992, the Munich-Riem Airport was officially closed, and the operations at the new airport - Munich airport - commenced in the morning of 17th May, 1992. The airport was initially named after Franz Josef Strauss - a West-German politician from the 1950s until 1988. Strauss was also the governor of the state of Bavaria, and a private pilot himself, who started the airport-project, with an intent of attracting the aviation industry to the state of Bavaria.

The airport acts as the hub of Swiss International Airlines and easyJet Switzerland. It facilitates a number of flights to European metropolitan as well as great leisure destinations. It also serves long-haul flights to North America, Middle East, and even China. 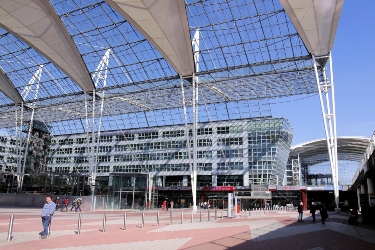 The Munich airport is so intricately built that it leaves the tourists and travellers in awe of its beauty. Spread over a sprawling area of 3,892 acres, the airport has two large passenger terminals, - namely Terminal 1 and Terminal 2 - two runways with the third one being planned, Munich airport centre, parking areas, visitor viewing facilities, Lufthansa flight operations centre, two hotels - Hilton Munich Hotel and Novotel - and Audi's training facility!

Munich airport is truly one of a kind! The airport has a myriad of facilities that cater to the needs and wants of the tourists and travellers. The airport authorities leave no stone unturned in ensuring the comfort and entertainment of the touristy souls! The airport has its very own brewery for quenching the thirst of the public! Apart from the brewery, the airport has guided airport tours, a casino, mini-golf, a visitor's terrace, and showers! Don't worry!, that is not all! The airport does offer the basics! There are first-class lounges that the economy class passengers will have to pay for, 24*7-operated restaurants at the Munich airport centre, and free access to unlimited WiFi at the airport!

With everything mentioned above, Munich airport has certainly made the cut to one of the best airports in the world! The airport will give you a unique experience, let alone the city!

When treading into a foreign land, planning ahead is of prime importance! Nobody wants to stress on a vacation or jeopardize the safety and comfort of their loved ones. The chaos of an unplanned arrival at an airport is not unheard of!

Don't worry! You can easily avoid any potential mess or mishap by planning ahead and planning smart!

One of the key plans that you need to make prior to kick starting your journey is for pre-booking the airport transfers!

Pre-booking airport transfers has its own benefits! From getting early bird discounts to a stress-free vacation, planning ahead would never harm you!

Rydeu's exciting offers come with their perks, while Rydeu's suppliers have incredible offers for the tourists, too! Now, with Rydeu, the tourists can choose from a large pool of amazing offers!