Known for its fashion and market, Milan is the capital of the Lombardy region of Italy. From the quaint Duomo di Milano cathedral and Santa Maria Delle Grazie convent to featuring some of the top-notch restaurants in the country, this place has been a business hub for people all around the globe. Milan has gained popularity over time with Leonardo da Vinci’s “The Last Supper” which has set an exemplary example of the culture coated with a layer of art. 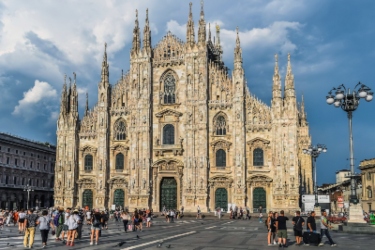 Where Rome is known to be the political capital of the country, Milano has always focussed more on becoming the moral capital to impart the rich history and knowledge that it embraces. Milan is a perfect blend of ancient values with contemporary art and remains one of the most important cities to visit in Italy. Commenced in the late 19th century, Milan thrived on innovation, fabrication and competency, Milan became the richest city in Italy and one of the top richest places in the entire Europe.

Initially focussing on the development of the economy and art, Milan is now coming out strong in the fields of commerce, fashion, design, communication, healthcare, education and tourism. Milan has been declared to be world’s top 4 most fashionable cities and features various fashion international events such as  Milan Fashion Week and Milan Furniture Fair which booms the revenue of the city and leaves it on the zenith of Italy. The city is home to some of the most expensive and widely spread fashion brands which set a class apart fashion in the contemporary era.

Apart from being a conveyer of history and initiator of economic success, Milan also satisfies the taste buds of its tourists with some of the most mouth-watering dishes. Food is one of the most important reasons that every tourist want to visit Italy to experience the raw and pure taste, while in Milan, do not forget to treat your taste buds with Risotto Alla Milanese the creamy risotto is tossed with saffron flavour which gives it a beautiful colour while the creamy taste makes it extremely heavenly and elegant.