Lyon is a World Heritage Site by UNESCO due to the beautiful Vieux Lyon and Croix-Rousse. To reach the beautiful city, Lyon, the travellers will have to take the flight for Lyon St Exupery Airport. Known as Aéroport de Lyon-Saint Exupéry by the locals, this airport is the most important airport of Lyon and is a focus place for Air France.

Lyon Airport Transfers come at ease as the city provides its travellers with an array of options to choose from. Dating back to the year 1975 when the airport was inaugurated with the main purpose of replacing the Lyon-Bron Airport for the arrival and departure of the passengers. Currently, Lyon-Bron Airport is used for general aviation 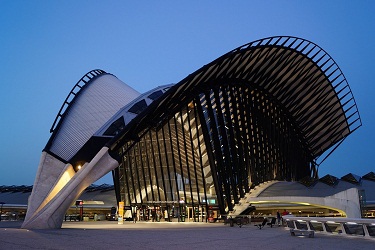 Situated in the town of Colombier-Saugnieu, the airport lies at a distance of 20 km or 13 miles in the southeast direction from the heart of the city. The major airlines that the airport welcomes are Transavia France, Twin Jet, Air France, EasyJet and HOP. The airport warmly welcomed 11,037,698 passengers in the year 2018 and consists of two terminals for the arrival and departure of the passenger, Terminal 1 and Terminal 2. Designed by the architect Santiago Calatrava

The airport is nothing less than a city in itself. It is sufficient to provide all the facilities to its visitors. The top-notch amenities and the well-equipped nature makes it one of the most preferable airports in the country.

As soon as you enter the building, you can enjoy free WiFi provided for the entertainment and requirement of its passengers, download a movie on the go or listen to your favourite music without worrying about the data. There’s a prayer room for all the spiritual people who want to connect with the almighty far away from the hustle-bustle of the airport. The airport also has several eateries and restaurants that offer lip-smacking food to its tourists, the duty-free shops allow you to grab some souvenirs for your loved ones at an exceptionally low cost.

The airport also has several additional facilities like ATMs for cash withdrawal, currency exchange centre if you want to prevent yourself from getting looted by exchanging at a local pawn shop. There are numerous charging points for your electronic devices and a gigantic waiting area where the tourists wait during the delay of their flight. Rydeu provides the best airport transfers in budget, the door to door pickup and exceptional service makes us the best, so what are you waiting for? Book a ride with Rydeu today.

After landing on this dream city, the travellers can enjoy the various modes of transportation according to their budget, need and the amount of luggage they are carrying such as bus, trains, metro and taxi from Lyon airport. While public transport facilities like busses, trains and metros can prove themselves to be easy on your pocket, it will be nothing less than a challenge to travel in such a hurly-burly environment. Airport transfers from Lyon are not that easy as the city is quite huge and hosts a large number of passengers every year.

Lyon airport taxi transfers are the best way to reach directly to your accommodation without worrying about travelling amidst the sweaty passengers or taking various vehicles to finally crash on that sumptuous bed. If you are looking for a taxi in Lyon Airport in your budget, make sure to do your research before reaching the city. One additional perk that the passenger can enjoy while opting for Rydeu is that we provide the exact estimation for the pre-booking and the easy payment method to assure a laid-back trip to all the explorers out there.

Lyon airport taxi transfers is one of the easiest ways to reach your accommodation from the airport without going too heavy on your wallet. To slip into the arms of Mother Nature, escaping from all the burdens for a while rejuvenates our soul. If you are looking for unruffled Lyon airport taxi service, make sure to explore Rydeu’s services to select the best option as per your choice and experience the best Lyon airport transfers. Book Lyon airport cab to the city centre and lose yourself into the ultimate beauty of Lyon and make memories that you can cherish till eternity.