Also known as Kranebitten Airport by the locals, Innsbruck airport is situated in Tyrol in the western part of the country. The airport is situated at a very close proximity to the city centre, just 4 kilometres away which makes the transfer very easy, convenient, quick and money saving for all the visitors. The airport started functioning in 1925 majorly handles the regional flights and occasionally handles the international flight with the arrival of the peak season. During the winter season, you might be able to witness the merry chaos caused by the passengers arriving in hope to be a part of the paradigmatic sight of the winter sports being played by the professionals.

The airport has just one small terminal that started operating in 1964 and does not have any air bridges or mobile airways. The airport is small and can not host an aircraft that is bigger than the size of a Boeing 767. In the year 2017, the plan for a bigger terminal was passed due to the large number of passengers arriving and departing during the winter Olympic. Innsbruck International Airport was home to some of the most budget-friendly aircrafts such as Tyrolean Airways and Welcome Air. 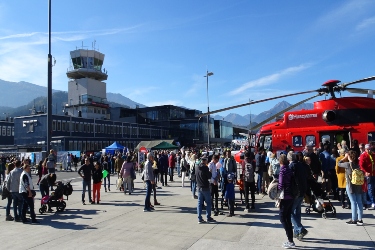 There are approximately 20 check-in points at the airport so that the visitors do not have to be worried about waiting too much. However, make sure to arrive at least 1-1.5 hour prior to your flight time to ensure a smooth journey without any hassle. There are numerous low-end restaurants at the airport to dine in and duty free shops featuring the best in the most pocket-friendly price. So in case you did not find enough time to shop from Innsbruck, you can grab some souvenirs from the airport for your loved ones. There are basic facilities like WiFi, ATMs and currency exchange to give leverage to the visitors.