Also known as Flughafen Hamburg by the locals, Hamburg International Airport is a major one in the city and fifth most significant airport in Germany. In the year 2016, the airport was officially renamed as Hamburg Airport Helmut Schmidt named after the renowned German chancellor Helmut Schmidt. Situated in Fuhlsbüttel, the airport lies at a distance of 8.5 km from the north of the city centre and is seen to be a hub for Condor, Ryanair and TUI fly Deutschland. The airport hosted a total number of 17,231,687 passengers in the year 2018 and in the year 2017, the airport was seen to feature flights that flew to 150 or more leisure destinations. 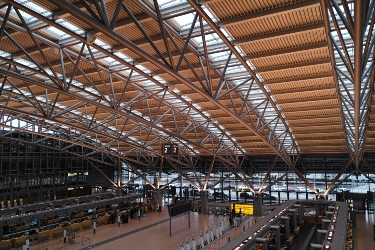 Hamburg International airport was also seen to be of great importance during WWI when the airship hangar was extensively put in use by the German government. There are two terminals at the airport which are Terminal 1 and Terminal 2, connected to the airport with the help of airport plaza and the baggage area. The airport plaza is home to the central security point as well as numerous mouth-watering cafes to satisfy your taste buds, restaurants to fill your stomach and lounges to entertain you in case of any delay. The airport is also home to the S-Bahn station which connects to the city centre.