The major international airport of Groningen, Groningen Airport Eelde welcomes you as soon as your trip begins. The airport is just a stone’s throw from the center of the city and serves the northern half of the Netherlands. Generally used for holiday flights operated by Transavia, TUI fly Netherlands and Corendon, the airport has one small terminal.

Originally started under the name Hakenkampsveld in 1928, the airport underwent several name changes before officially being named as Groningen Airport Eelde in 1988. The need for an air link between Rotterdam, Amsterdam and Groningen was the reason for the establishment of the airport in 1928. During the occupation of the airport by the Germans, it was expanded significantly and multiple hangars were built. A new passenger terminal was opened in 1977 and a bus link was established to improve the accessibility to the airport.

The airport is home to multiple unique organizations like the KLM Flight Academy, Noord Nederlandse Aero Club and General Enterprises. The airport is not slot constrained and has unlimited potential of growth. Attracting both holidaymakers and business travelers with its high-quality and market-oriented approaches, the airport assures its passengers a comfortable journey. Passengers not just from the neighbouring provinces, but also from Overijssel, Flevoland, Gelderland and the border areas with Germany prefer the Groningen Airport Eelde for its close proximity and easy access.

The airport has an excellent business park which offers many opportunities for development.  It is a place booming with activity and is home to a number of internationally operating companies.

The airport is important for the University Medical Center Groningen's donor flights and trauma helicopter. It is additionally used by The Ministry of Defence and the Emergency Services for military operational flights. 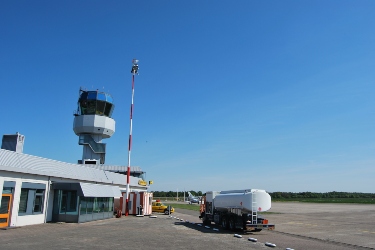 The airport’s terminal 1 is known as the Main Terminal (M) which is divided into five piers, which are, A, B, C, D, and F. The Piers A, B, C and D are situated in the Swiss side of Terminal 1. The passengers travelling from these gates check in at the main check-in hall as well as use the central security check above the check in hall.

Pier A stands right in front of the main shopping area and facilitates destinations in the Schengen area. Pier B consists of two non-Schengen circular satellite buildings which are reached from the shopping area through a walkway built underground, which also serves as passport control. Pier C is also non-Schengen,  and is situated to the right side of Pier A and houses long haul flights. Pier D consists of one big circular satellite and one bus gate building, this is divided between Schengen and non-Schengen passengers on different floors.

Enjoy a stress-free journey between the airport and Maastricht with Rydeu’s reliable transfer service. Rydeu provides a one-step solution to all your problems with its easy and hassle-free experience. Transfers from Groningen Airport Eelde have never been easier!