One of the best kept secrets of Europe, with an unmistakably cosmopolitan atmosphere, Graz retains a distinctive magnificence and flair, accentuated by its rustic architecture. Known to be the second largest city in the country, Graz is the capital of Bundesland and lies at the foot of Mur River amidst the Styrian Alps and a broad fertile basin, the Grazerfeld. The word Graz is derived from gradec, which means “tiny fortress”. The best preserved city of Central Europe boasts a population of 633,168 and was known to be the one of the most populous cities in Europe. 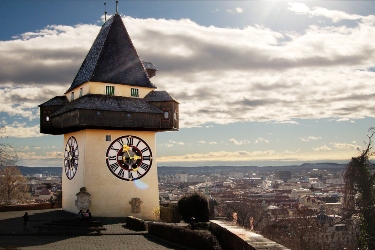 Graz has been an inspiration for the residents of Croatia, Slovenia and Ljubljana due to its breath-taking architecture and awe-inspiring history. In the year 1999 the historic centres of the city were declared to be the World Heritage Site by UNESCO which later expanded and covered the whole city thereby adding wings to the glory of this place. The year 2003 marked to be a significant sight when Graz was declared to be the cultural capital of the country and a city of culinary delight in the year 2008. 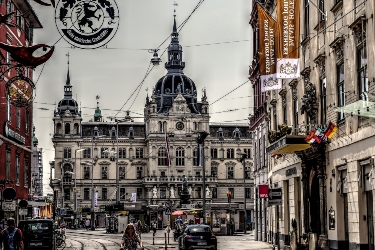 The slow and epicurean lifestyle that the city provides is all about pampering yourself with the best, now that you have finally made it to the city of numerous shops, make sure to pack empty bags as you have the option to stroll through the high end shops to the low-end ones which is situated on the streets where the renaissance art amalgamated with the baroque architecture and dazzle every eye that witnesses the ultimate beauty of the city. However, as compared to several other cities in Austria, Graz has always been a bit off radar when compared to the most visited places in the country, so if you want to explore an underrated yet the most beautiful city, you already know your destination.

Graz is a city which entertains favourite atmosphere to meander around and stroll through the streets and enjoy the cold wind gushing by almost all around the year, however, if you are looking to visit when the various culture unite to the city in form of tourists, make sure to book your tickets during April to September. The accommodation rates are usually budget-friendly, the temperature gets a bit warm during the summer months which makes moving around the city a bit hard. Every month has some surprise for you to unwind so make sure to plan your journey and book the tickets in advance. 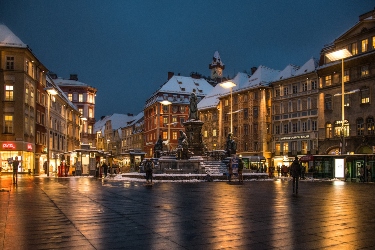 Claimed to be the World Heritage Site by UNESCO, the old town Graz is unlike any other part of the town. This historical architecture must be explored on foot if you want to keenly observe every minute details, the supreme part of this sightseeing includes the glorious sculpture of Archduke Johann that stands proudly near River Mur, The Town Hall and Haus am Luegg. If you want to dive into the divinity of holiness, you can visit the Gothic Franciscan Church that is renowned for its vest tower. Apart from the above mentioned places, there are a lot more places waiting for you to explore. 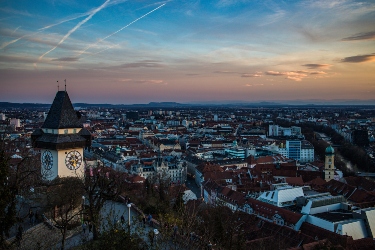 An adrenaline kicking journey from the funicular all the way up to 473 metres will lead you to this clock tower, if you do not wish to take the funicular, you can even hike up the hill to explore this place. This 28 metre tall clock tower is one of the most significant places of Graz accompanied by a 94-metre deep Turkish Well, referred to as Türkenbrunnen by the locals and a 35-metre tall Bell Fry. There’s a cute cafe tucked in this place and an open theatre for you to enjoy. 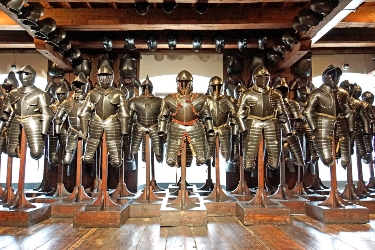 Known to be the world’s biggest historical armoury the collection of this place will surely leave your mouth wide open for a while. With over 13,400 small arms, in which approximately 4259 are pistols, the overall collection includes falcones, mortars, cannons, volley guns and their accessories. You might even find various swords, and the amazing display of armour featuring the soldiers and the way in which they protected themselves with these arms. 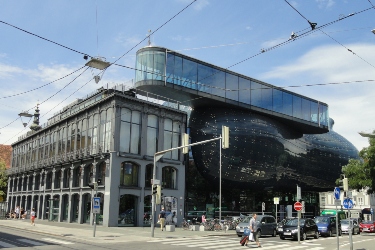 Designed in the shape of an alien, this art museum is an absolute delight for all the art lovers out there. Built in the year 2003, the museum was specifically meant to gain the title of European City of Culture. The gallery majorly boasts the art of contemporary artists from the 19th and 20th century, the museum gains a whole lot different levels of beauty at night when it lights up giving off a vibe of a lit spaceship. 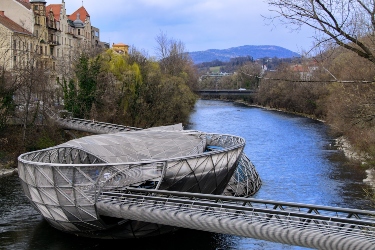 Image by Gerhard Bögner from Pixabay

Hearing about a man made island leaves us in shock, doesn’t it? Well, one of the many sightseeing places that helped Graz in grabbing the title of the cultural capital of Europe is Murinsel. The 47 metres long reverted seashell shaped container is made up of steel and floats amidst the River Mur. There’s an amphitheater for hosting various concerts and events along with a cafe tucked at the corner to satisfy your hunger and light up your taste buds with the best dishes available. 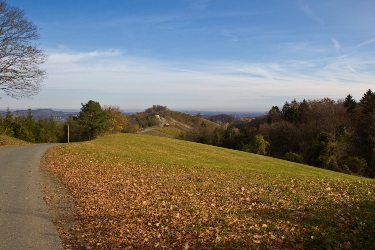 Squatting in the district of Leibnitz in Styria, Gamlitz is a small district tucked in the mountains which provides a serene atmosphere and some of the most scenic views to its visitors. The city is a must-Visit if you are a nature lover, the natural setting and the love that Gamlitz possesses for originality is what makes it different from all the other places in Austria. 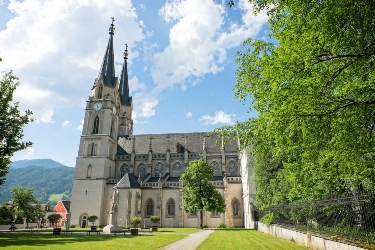 Hidden amidst the Ennstral Alps, Admont is a small town in the Austrian state of Styria. Known for its Admont Abbey, the monetary foundation was founded in 1074. Make sure to visit Admont if you want to get away from the chaos of Graz and spend some quality time wrapped up in nature with your loved ones. 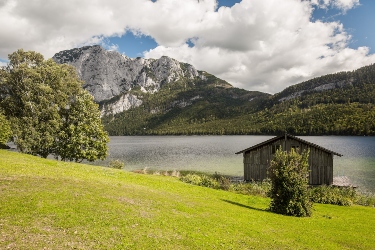 If you’re planning for a luxurious getaway to lose yourself amidst the mountainous regions, make sure to visit Styria. The rare wine that you can find in this state is a great pick if you are planning to take some souvenirs for your loved ones. You can also enjoy the grand castles, and the relaxing spas. 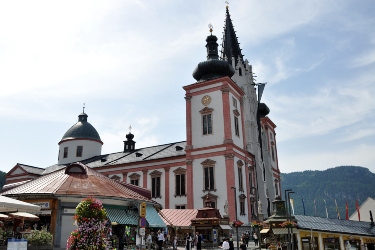 Situated at a distance of 143 kms in the northern direction from the city of Graz, Mariazell is a city which is known for its winter sports, it is situated in a scenic surrounding in the Salza valley. If you want to dive into the divinity of the catholic culture, there are a lot of pilgrimages that one can explore. 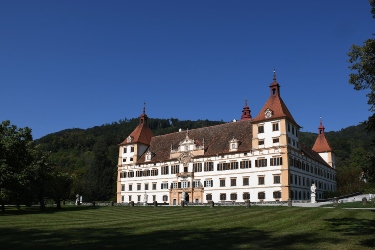 Blessed with the greenery, this place is best known for the Eggenberg Palace situated amidst the lush green gardens displaying luxurious state rooms with over 500 baroque paintings that dangle proudly on the ceilings of this palace. The archaeological museum features Hallstatt-period artifacts and is an absolute delight for the medieval art lovers to satisfy their art hunger. 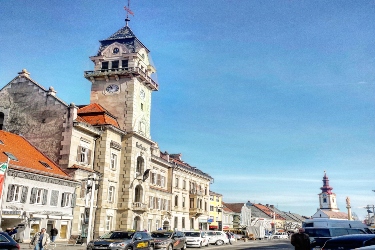 Between the Mur and Sulm River lies this city of Liebnitz. If you are an adventure freak, we bet you to visit the Abbey situated in the adjacent direction of the church situated on the hill of Frauenberg. The gothic ruins of Flavia Solva during the Roman Settlement remains one of the most visited places in the city. 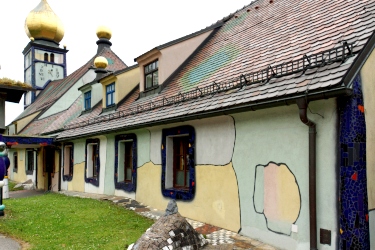 Known to be the smallest city in the district of Voitsberg, Bärnbach attracts a lot of tourists due to its old gothic churches, coal mines and manual glass manufacturing. The tiny city is a perfect getaway destination for all those who want to get away from the connotation and enjoy some quality time with Mother Nature, strolling through the streets trying regional food. 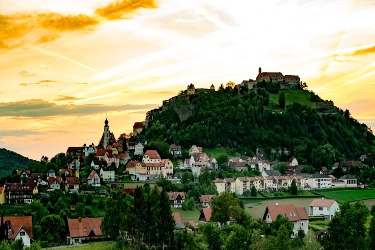 Image by max_gloin from Pixabay

Situated on the hill above the residence of locals, Riegersburg is a gift to Austria and needs to be preserved at all costs. While the Riegersburg castle displays the baroque architecture in a dramatic way, Greifvogelwarte Riegersburg is the place for all the nature lovers to observe various species of animals and some rare flora.