Also referred to as Flughafen, Graz is the primary International Airport that majorly serves the southern part of the country. Situated near Graz, and is just 9.3 km away from the vibrant city centre. The construction of this airport started in 1913, Graz airport landed the first airport in 1914. Initially the airport was seen to be a site of Thalerhof internment camp which was functioned by the government of Franz Joseph 1 of Austria.

The airport hosted its first domestic passenger flight from Vienna to Graz in 1925. The year 1937 marked a progress in the airport when the construction of a new terminal came into action, due to the rising number of passengers every year, Graz decided to ease the work of passengers by creating a terminal for a smooth flow. The airport was extended to 3,000 metres in 1998. The arrival of 21st century marked a huge change in the history of the airport when the passenger rate increased to 750,000 and 900,000 in the year 2004 which led to the extension of the terminal and the construction of a new terminal in 2005 for the arrival and departure of the passengers all round the world. 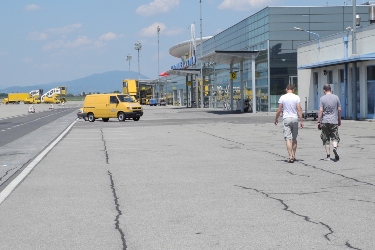 The passenger terminal features some of the most pocket-friendly shops to grab some souvenirs from, the shops are duty free which assures a low price from anywhere else in the city. Numerous restaurants and cafes are lined across the terminal to satisfy the taste buds of its visitors while keeping the hunger at bay with the mouth-watering regional dishes. There is a bank and an ATM in case you want to withdraw some cash before entering or leaving the city. There are several service counters to assist you and car rental facilities right outside the airport for your comfort.