What’s one country which pops up in the mind of every traveller when they’re travelling in a group and want to witness it all at one place? The answer to that has to be Germany. With an array of activities from peaceful sightseeing for the serene seekers to the adrenaline kicking adventurous games for all you playful souls out there, Germany holds the capacity to bless you with nothing less than too much. The historical museums help the country in regaining the cultural pride and the soothing music in the background helping you in gaining the feeling of ecstasy is priceless.

Distance from Frankfurt to Strasbourg- 182 km 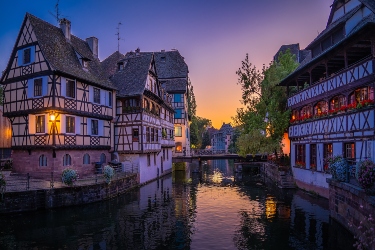 There is a perfect combination of German and French architecture in Strasbourg and visitors heartily enjoy the enormous multitude of Street musicians which can be seen dispersed all over the city. Strasbourg is an energetic city which boasts of an outstanding architectural heritage. It is marked by its profoundly rich history and is located at the boundary of Germany in Alsace, Strasbourg is the capital and vastest city of the Grand Est region of France. Home to numerous European institutions, it is the delighted emblem of democratic values. A youthful city replete with multicultural layers of history, Strasbourg forms a perfect bridge between past and present. Revel in the grand beauty of this old town, decorated with medieval half-timbered houses, scenic canals and soaring Gothic cathedrals.