Situated in a close proximity to Frankfurt are many small yet vibrant places that ought to be explored by every visitor. They say great places can never be recommended by people, it can just be discovered while exploring the places that already are on the map, speaking of which reminds us of Mainz. With half-timbered houses and the rustic setting, the city has been known for making its visitors travel back in time to experience the raw history and baroque architecture of Germany.

Distance from Frankfurt to Mainz-  43.7 km 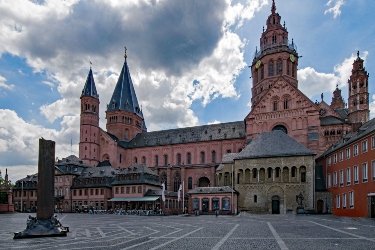 Squatting on the Rhine River, Mainz is a city in Germany which is known for its half timbered houses and the rustic market squares with alluring souvenirs. The heart of the city is decorated with  Marktbrunnen which is a renaissance fountain bordered with red columns. The Gutenberg museum was constructed to honour the inventor of the printing press, initially as well as currently, Mainz is the largest city of Rhineland. For over several decades from now, the city’s skyline has been dominated by only one building which is none other than the Mainz cathedral. If you want to witness the sweet connotation of the city, you can visit Kirschgarten square which is seen to feature a lot of boutiques, cafes and shops.