During World War II, the airport was handed over to Luftwaffe, following which the first bombers took off from the Frankfurt airport to attack France. With its runway destroyed, the airport suffered significant damages in the war, albeit, a temporary runway was later built by the US army after the war ended. It wasn't until 1948 that the airport emerged as a major airline hub. It was only after a terminal called "Empfang Anlage Ost" was constructed that the airport registered itself as one of the major international airports in Europe. 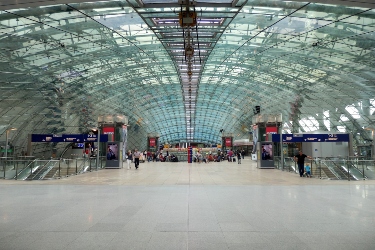 Frankfurt airport is one of its kind! The airport caters to the needs of all of its tourists and travellers perfectly well. Apart from a small First Class terminal, which is exclusively operated by Lufthansa, the airport has two large terminals, namely Terminal 1 and Terminal 2, dedicated to the passengers. While Terminal 1 is the older and larger terminal of the two terminals, and has been divided into three floors with check-in counters and arrivals on the first floor, Terminal two has been divided into two floors.

The airport is massive, and the tourists and travellers could find themselves stuck in the labyrinth of facilities made available for the convenience and comfort of the tourists and travellers. There are SkyLine trains and shuttle buses for the tourists who wish to move to and fro the two terminals from either of the terminals. There are a number of duty-free shops, outlets, restaurants, and assorted services that include some 24*7 eateries, which have been made available across the airport. While the access to the WiFi at the airport is free of cost, the passengers can access the shower facilities for a fee.

Apart from all the exquisite facilities mentioned above, the airport also has phenomenal airport lounges that the passengers could get access to by getting themselves a day pass!

With all said and done, Frankfurt airport is remarkable! Rest assured, the touristy souls will get an outlandish treatment at this mammoth airport.