Netherlands’ second largest airport, Eindhoven has gained market share at an accelerated rate against local competition. Used by both civilian and military traffic and located on the edge of town, the airport is located in one of Europe’s best catchment areas and offers a wide range of facilities. Some of the top routes from Eindhoven Airport are Malaga, London, Budapest, Barcelona, Ibiza, Sofia and Prague.

Founded in 1932 as an airfield under the name Welschap Airfield, it underwent extreme changes due to the capture by German forces. The Airfield was further improved when it came under the control of the American paratroopers and it was finally returned to the Air Force of Netherlands in 1952. Since then, the airport has seen continuous expansion and an addition of a 120-room Tulip Inn Hotel in the airport itself was done to accommodate the growing number of flight 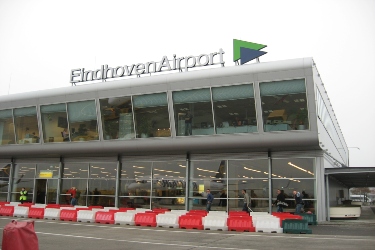 Among others, an exchange office, luggage lockers, a health centre and a lost property office is also available to the passengers. Eindhoven Airport offers a full range of shops; fashion, lifestyle, literature, jewelry, souvenirs and basic groceries which can be found in the terminal of the airport. The shops usually sell duty-free items which gives you a great chance to pick up some souvenirs in case you haven’t. There are numerous tax-free shops like Travel Plaza, Travel Luxury and the new Business lounge Aspire by Swissport provide ample options to shop from. Besides shopping at Eindhoven Airport, you can also enjoy breakfast, lunch or dinner at the variety of restaurants, bars and cafes available. Have a good meal at Upstairs, La Place or the Bavaria Beer bar. On the first floor, you can find Kiddyland where kids can enjoy themselves before the flight. For conferences and meetings, a business centre is available at the airport which can be used by the businessmen in case of an emergency meeting.

Since 2010, Eindhoven Airport has been the host of European Air Transport Command consisting of seven European nations who share aerial military assets in a single operative command. It would not be wrong to say that the airport is a home in itself. Airport transfers with Rydeu are simply the best, from door to door pickups to convenient and hassle-free rides, we have it all. Make sure to explore our ongoing offers to steal the best deal. Book your ride today and enjoy a memorable stay in the dream city of Eindhoven.

Enjoy a stress-free journey between the airport and Eindhoven with Rydeu’s reliable transfer service. Rydeu provides a one-step solution to all your problems with its easy and hassle-free experience. Transfers from Eindhoven Airport have never been easier!