The third-largest airport in Germany, Düsseldorf airport is located 7 kilometers from the city! After two years of construction, the airport had let its curtain down for the very first time on April 19, 1927. The airport, operated by Deutsche Luft Hansa, started catering to 4 cities -

Berlin, Hamburg, Cologne and Geneva - initially. During World War II the airport ceased its operation and was handed over to the military for the use of its airfield. It was only after the war was over that the airport restarted serving the civilians, and its operations for the civil-use began under British European Airways 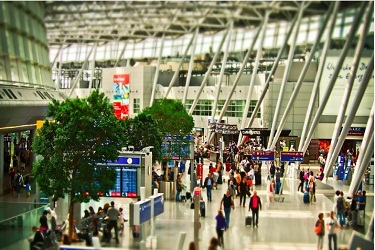 The Düsseldorf airport is mammoth in its size! The airport has more than enough facilities to ensure comfort and convenience of the travellers! Despite having a great record of serving the tourists and travellers effectively, the Düsseldorf airport has one painful memory of its past! On April 11, 1996, the airport suffered the world's worst structural airport-fire, which was caused by welding work on the road in front of Terminal A.

The airport got back on its feet and reconstructed all that it lost in the fire soon after, and was developed sufficiently well by 2000. The airport has three large passenger terminals- A, B and C - and two runways! The airport also has "Airport City" on its premises, which has a Porsche showroom, Meritim Hotel, Sheraton Hotel and a Congress centre! Apart from the airport city, the Düsseldorf airport has a myriad of facilities like an ATM machine, Pharmacies, eateries, a bank, restrooms, memorial room, charging stations, babycare facilities, smoking areas, and five high-end lounges with payable access - Lufthansa Business Lounge, Lufthansa Senator Lounge, Hugo Junkers Lounge, The Emirates Lounge and the Open Sky Lounge. The airport has everything the passenger can ever imagine, staying at the airport even for a little while would feel like staying in the arms of pure luxury. You can stroll through and find eateries to taste some lip-smacking appetisers.

With all that has been said, being on the Düsseldorf airport is an experience within itself! You will never feel the lack of any of the services required to make you feel at ease and entertained. Rydeu strives to pamper its passengers with nothing but the best. Now choose comfort without splurging, book a ride with us today for a memorable trip ahead.

Pre-planning always has its own perks! Especially when travelling, one can't ignore the importance of being well prepared before the D-day! From possibly lower rates to early-bird discounts and stress-free transportation, booking airport transfers beforehand comes with its own benefits.