Located in one of the most peaceful countries, Copenhagen is the capital and the most densely populated city of Denmark. Home to the majestic Amalienborg castle, which nestles the Danish royal family, Copenhagen is situated on the eastern coast of Island, Zealand, which offers the tourists a rejuvenating experience. 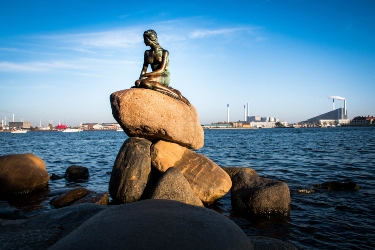 The Little mermaid,Copahagen      |      Image by Maria Eklind from flickr

From majestic castles to the Tivoli Gardens, The Little Mermaid, and moreish Danish pastries at the cosy cafes, Copenhagen offers the tourists a frabjous experience, with a little amazement at every turn.While the National Museum of Denmark, cradling your fascination with art, culture, and history, will leave you intrigued, the Stroget Shopping Mile, teeming with life, will implore you to loosen your purse's strings a bit more.

Copenhagen is the perfect blend of ancient reverie and à la mode architecture. A city, which is thought to have been a Viking village in the early ages, Copenhagen found its way to the history in the 11th century, when it originated with a harbour. 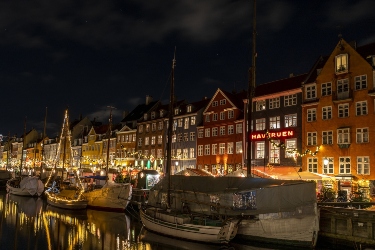 The city gained significance when, in the middle of the 12th century, its reins were handed over to Bishop Absalon, who fortified it by building a portentous stone wall around it during the 13th century. Copenhagen has had its own share of peaks and valleys. The city, in the earlier times, was repeatedly attacked by the Germans, and had to hold out against a siege. Despite being tested a multitude of ways, Copenhagen successfully stood the test of time.

Copenhagen, having been blessed with a magnolious harbour, soon developed into a significant trading nucleus of the country. Currently helmed by Queen Margarethe II of Denmark, Copenhagen became a city in 1254, under Bishop Jakob Erlandsen.

While one can quench their touristy thirst by visiting the city at any time of the year, one should visit from May to September to nestle in the warmth of the sun; in January, if one wants to spend some time with a snowman; in December, if one wants to hear the jingle bells! All in all, Copenhagen offers the tourists a wholesome experience. It beats the blues, refreshes one's souls, and offers an adventurous experience all along!

Copenhagen is a tourist-friendly city. It will neither burn your pockets, nor leave you with a dry experience. It offers a myriad of transport facilities to its tourists. One can choose a luxurious or a budget-friendly transport facility. 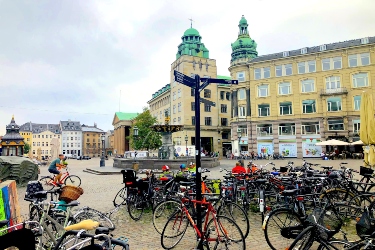 On foot or by a bike

Yes, you read that right. Copenhagen is a small, and a cozy town. You don't need to spend a huge chunk of money to get around this magnificent city!What's cheaper and more interesting than travelling on foot and witnessing the intricacies of the city firsthand?

Alternatively, one can hire a bike for themselves, and get around the city on their adventurous ride!The bicycles come with an attached GPS, so that you can always find your way back! The bicycles cost around DKK 30 for an hour.

Copenhagen offers a regional train, metro, and buses, which have made the transportations easier. The metro and the buses are operational 24*7, and are budget-friendly. You can buy timed-tickets, or can alternatively buy a Copenhagen card, which will make you entitled to receive free rides on buses, metro, and the local trains.

One of the most convenient ways of transportation is in a self-driven car. You can easily find a car-rental agency, if you decide to rent a car. What's the best part? You don't even need an International driver's license! Though you do need to have your native country's driver license on you!

As interesting as that sounds, exploring the city on a boat will definitely leave you with a magical experience! Canal tours offer guided excursions, and depart from the areas like Nayhavn and Gammel Strand.

Hiring a private taxi is undoubtedly the best option! Rydeu has made it easier to order taxi in Copenhagen. One can easily book a taxi from Copenhagen airport to the city centre, or to the other parts of the city. It offers both, budget-friendly, and luxurious private taxis to all the tourists. You don't have to hassle anymore! Rydeu will take care of your comfort, safety, and budget, too! 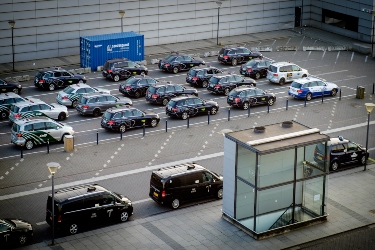 Copenhagen airport transfers range from budget-friendly to luxurious transport facilities such as :

Metro or the regional train

If you are concerned about your time, metro or the regional train would be the best options for you, to travel from the airport to Copenhagen! The metro or the regional train will drop you at the heart of the city - from Copenhagen airport to the city centre - under 15 minutes. All you will need is a 3-zone ticket, which can be brought at the airport ticket, and will cost around DKK 36.

While the regional train will drop you at the central station, metro would suit you best for travelling in and around the city.

Though not for people who are on a time-crunch, bus 5a is also an option to travel from the Copenhagen airport to the city at a fair price. It will take almost 35 minutes, and will cost you around DKK 200-250.

For transfer from Copenhagen airport, one can easily book a Copenhagen-airport taxi outside Arrivals. They cost around DKK 250-300. Alternatively, one can always trust Rydeu, which is undoubtedly the best option. Want the cheapest taxi in Copenhagen? Rydeu is always to your rescue! What's unique? Rydeu never lets you worry! You won't have to worry about your budget or safety, and could sit back and relax, engrossed in witnessing the beauty of the city, while Rydeu will ferry you safely to your accommodation, in your private ride!

Copenhagen, as a city, is like a fountain that not only quenches a tourist's thirst, but also ferries them to Utopia. Its rich culture comprises everything from art and architecture to delectable cuisines. It has a lot of ethereal sites that will leave you ecstatic, elated and in a state of anemoia. 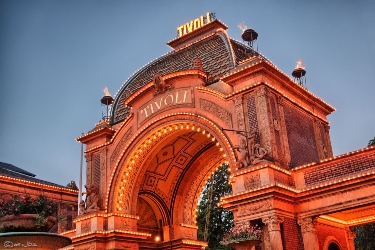 An amusement park with gardens, Tivoli Gardens are outlandish! Talk of bone-chilling roller-coaster rides, open-air theatres, hall-of-mirrors, a myriad of cozy and entertaining cafès and restaurants with exotic food, the Tivoli Gardens have it all, and much more!You can reach the Tivoli Gardens by booking a cost-effective ride with Rydeu! Choose from multiple budget-friendly and luxurious rides to be ferried to your location within no time! 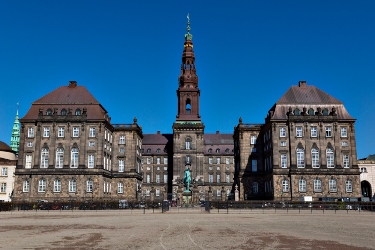 Nestled on the islands of Slotsholmen is the brain of Denmark - the seat of the Danish government.It is the only building in the world that houses all the branches of government.

To reach the Christiansborg Palace, all you need to do is book a comfortable budget-friendly ride with Rydeu! Choose from us or our suppliers and let us handle your comfort!