Bologna is known to be the seventh most populous place in the country and the beautiful city is linked to some of the most amazing places in Italy, Verona being one of them. Bologna to Verona Car rental is the best facility to visit one place to the other. Transfers from Bologna to Verona can be done through various vehicles such as Bus, Trains and private transports. Although public transportation might prove itself to be easy on your pocket, it would be really uncomfortable to travel all the way from one city to the other without getting a seat.

Taxi fare from Bologna to Verona varies as per the vehicle that you wish to choose. From luxurious business class vehicles packed with all the facilities to pocket-friendly comfy rides that help you to visit the beautiful places in the country. Intercity taxi to Verona is now just a click away with Rydeu.

Distance From Bologna To Verona- 144.2 km 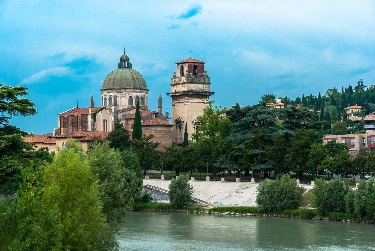 Squatting on the tranquil Adige River, Verona is known to be one of the most visited places in Italy due to the high fan following of one of the most renowned works of Shakespeare, “Romeo and Juliet”. The gothic town encompasses old buildings with concrete balconies overlooking the courtyard and will leave the visitor in awe of the place. Walking down the street will make you witness the rustic buildings with overlooking balconies.  Art lovers would not get enough of the place because it simply has a lot to offer, from the alluring courtyard which is said to be the Juliet’s house to the renowned amphitheatre which hosts numerous concerts and breath-taking opera performances. The bustling centre is dominated by a mammoth.