The fashion capital of Italy is home to some of the best fashion shops in the world, Milan has not only attracted due to it being the economic pillar of the country but also boasts some of the best places that help in regaining the pride of the country. Situated in close proximity to which is a historical city Bologna, which is a must visit for all those who want to dive into the divinity of ancient Italy at its best.

Bologna To Milan Taxi will save you from the hustle-bustle of the public transportation that you might experience while travelling amidst the crowd. Car hire to Milan will provide you with the leverage to stop your vehicle anywhere, anytime and keenly observe the beauty of Mother Nature without any disturbance. Rydeu provides the best Bologna to Milan Taxi service for all of you. So pack your bags and leave for the beautiful country without any further ado.

Distance From Bologna To Milan- 216 km 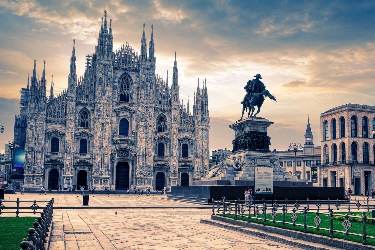 Known for its fashion and market, Milan is the capital of the Lombardy region of Italy. From the quaint Duomo di Milano cathedral and Santa Maria Delle Grazie convent to featuring some of the top-notch restaurants in the country, this place has been a business hub for people all around the globe. Milan has gained popularity over time with Leonardo da Vinci’s “The Last Supper” which has set an exemplary example of the culture coated with a layer of art. Where Rome is known to be the political capital of the country, Milano has always focussed more on becoming the moral capital to impart the rich history and knowledge that it embraces. Milan is a perfect blend of ancient values with contemporary art and remains one of the most important cities to visit in Italy.