Situated on the Swiss plateau in the canton of Bern, slightly west of the centre of Switzerland, Bern is considered to be one of the most extravagant cities in the world. Known for its perfect blend of beauty and luxury, Bern connects to numerous other lively towns, including Freiburg. Freiburg is a vibrant university city replete with entertainment, history and culture. It is marked by its profoundly bicultural history. Admire the beautiful road connecting Bern with Freiburg, full of gorgeous prefecture and interesting sights. The experience of travelling via car is enhanced with the comfort provided by a private cab. If you choose to book a private car transfer from Bern to Freiburg, look no further than Rydeu.

Rydeu strives to make every journey safe and enjoyable. A diverse fleet of options varying to your budget, Rydeu offers safety and comfort for long distance transfers from Bern to Freiburg. Rydeu provides a one-step solution to all your problems regarding Bern to Freiburg services with its easy and hassle-free experience. Enjoy a stress-free journey between Bern and Freiburg with Rydeu’s reliable transfer service.

Distance between Bern and Freiburg– 101 miles 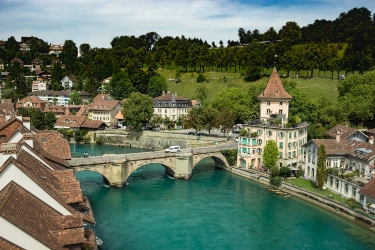 Situated on the Swiss plateau in the canton of Bern, slightly west of the centre of Switzerland, Bern is considered to be one of the most extravagant cities in the world. Bern boasts of wonderful sights, from enchanting cathedrals and museums to rusty hilly ranges and exhilarating hikes, this city manages to steal your heart in just one trip. Full of historical heritage sites, one of the main attractions for tourists and pride of the locals is the beauty of the Alps. The lavish greenery, pristine waters of River Aare, and monumental heritage sites make Bern the perfect escape from your daily mundane and exhausting life. This quaint city has a lingering but charming scent of history, arts, and craft that is omnipresent in the atmosphere. Its famous Old Town transcends you to ancient Europe with its engulfing gothic ambience and medieval layouts. 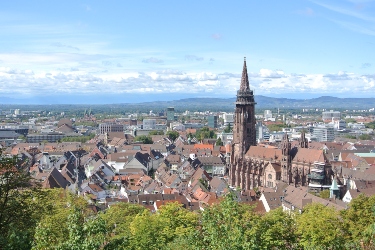 Freiburg is a picture-perfect medieval city in Baden-Württemberg, Germany with a population of about 230,000. Its innovative design is responsible for making it one of the world’s most sustainable and livable cities. Freiburg is a vibrant university city replete with entertainment, history and culture. Located on the southern edge of the country’s Black Forest, the town is home to numerous ancient structures that were carefully reconstructed after the second World War. The sunniest city in Germany, Freiburg is the city of miniature streams & cobble-stone streets. Tourists can be seen here all round the year and this huge footfall of visitors can be attributed to the city’s scenic beauty, relatively warm and sunny climate, and easy access to the Black Forest. Don’t forget to explore the numerous microbreweries that have been around since the 19th century.