One known for its beauty, one known for hosting the most significant place for imparting knowledge, Berlin and Rostock are similar in a lot of ways but different as well, which is what makes it beautiful. The capital of Germany and the main landing place for almost all the travellers deciding on exploring the magic, Berlin is a must if you want to witness the best of Europe, linked to which is Rostock, a simple laid back town known for its university, the oldest one in the world.

Berlin to Rostock taxi booking online will not only help you in saving some extra bucks but will also save a lot of your efforts in searching for private transportation after reaching the city. Private transfers from Berlin to Rostock is ideal for all those who want to spend some quality time with their loved ones without sharing the moments, while  in a public transport and enjoying the scenic views from their car. Rydeu provides exemplary car hire services from Berlin to Rostock, so what are you waiting for? Rush and ride with Rydeu. 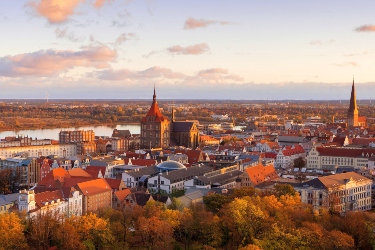 Straddling the Warnow River on the northern coast of the country, Rostock is a city known for the university of the same name. Founded in the year 1419, the university is seen to be the oldest one in the history of the world and attracts a lot of students from all around the world. If you’re a fan of wrapping yourself up amidst the lush greenery of Mother Nature, make sure to pay a visit to Rostock Botanical Garden, known for its arboretum and the alpine gardens. A magical blend of rustic culture and baroque architecture, the city elegantly features a lot of prides in the form of architecture, a perfect example of which is the gothic St. Mary’s Church. If you are in the mood of meeting some friends or strolling through the main market, finding places to dine in, make sure to keep Neuer Markt main in your list.