Bonded by the country, diversified by the offerings. Berlin and Potsdam are two alluring cities of independent Germany. Known to be the capital and the largest city of Germany, Berlin usually hosts a large number of tourists every year. Potsdam is a small town tucked away which is known to provide the best time to all the travellers who are seeking some time away from the hustle-bustle of the city.

Berlin to Potsdam private car rental will allow you to travel with your loved ones, without worrying about the time schedule of the public transfers, travelling as per your schedule is possible with Rydeu. We provide the best taxi hire service from Berlin to Potsdam in a cost effective price and easy way. So fellas, what are you waiting for? Berlin to Potsdam intercity transports is just a click away.

Distance from Berlin to Potsdam- 35.4 km 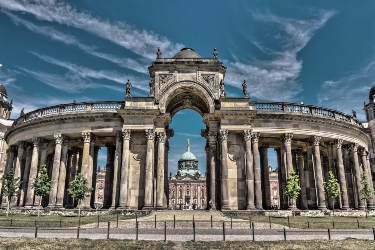 On the extremes of Berlin, lies this alluring little city which was once considered to be home to the Prussian kings. Tucked in a place which is surrounded with interconnected lakes, Potsdam provides a serene view to the travellers and is distinguished by a series of cultural landmarks. If you want to gaze onto the beauty possessed by the city all at once, make sure to visit the Historic Mill, the lush green English garden borders neoclassical Charlottenhof Palace. Dating back to the 19th century when the Roman baths were constructed in numerous architectural styles, contemporarily, it is the foremost important thing in the to-do list of every traveller. The gastronomy of the city will please each and every traveller to their core, the diversity in the cuisine will allow you to taste numerous dishes, however, while in the city, make sure to hog on the chilled beers and fried sausages.