Named after Otto Lilienthal, The Berlin Tegel Airport is the main international airport in Berlin. The airport has been efficiently catering to the needs and wants of the customers for more than half a century now. The airport's premises were earlier a part of the Jungfernheide forest, which was used by the Prussians as a hunting ground, and it was only in 1906 that a hangar was built for testing airships.

The Tegel airport shares a few memories dating back to the country's historical era! During World War I, the airport was dedicated to the military training of aerial reconnaissance, whereas during World War II, the airport was destroyed by the Allied air raids, soon after it had begun serving as a training ground for the military training of the Flak troops.

Apart from the two famous wars, the Tegel airport played a key role in Berlin's part of the Cold War era. 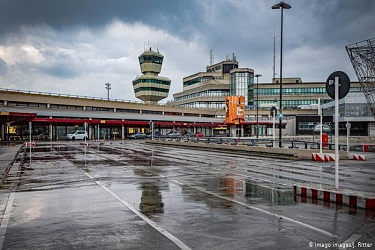 The airport, which has seen much destruction and devastation in its past, is now a place of wonder! It is so beautifully built and efficiently operated that no man could guess the tougher times that it has burnt through!

The Tegel airport is one of a kind, and focuses on catering to the needs and wants of the tourists and travellers. The airport, though small, has a number of facilities to make sure that the touristy souls are comfortable and entertained! The airport has two airport lounges which you need to pay for accessing, a hotel within its premises, sleep cabins and pods, day rooms, free WiFi, showers and a few eateries and shops for some window shopping on the go!

With everything that has been mentioned above, we are sure you would have a memorable experience at the Berlin Tegel Airport!

The airport is full of amenities and it would not be inappropriate to say that it is a home in itself.

The Tegel Airport is one of a kind and focuses on catering to the needs of tourists. The airport, though small, has a number of facilities to make sure that the touristy souls are comfortable and entertained. There are two gigantic airport lounges for resting in case of any delay in your flight. The sleep cabins are specially provided to save the passengers from any inconvenience while the free wifi gives the leverage to download and binge-watch an entire series while waiting for the flight. When we said the airport is a home in itself, we meant it. There’s a small hotel for the passengers if they wish to stay for a day and catch a flight the next day, however, the hotel is for necessity and would not entertain the passengers after one or two days. Numerous eateries and restaurants are also there to satisfy your taste buds with the finest German cuisine and rare exquisite wine. The souvenir shops are a grab on as there’s no duty charge and a tourist can grab much cheaper items than the city.

There are some additional facilities such as ATM, currency exchange and charging points to pamper the tourists with every service possible. So fellas, what are you waiting for? Book a flight right away and witness the world-class service of Berlin Tegel airport.

Pre-planning always has its own perks! Especially when travelling, one can't ignore the importance of being well prepared before the D-day! From possibly lower rates to early-bird discounts and stress-free transportation, booking airport transfers beforehand comes with its own benefits!