Also referred to as Bergen Flesland Airport is an International Airport situated in Flesland in the city of Bergen. Dating back to 1955, which marked the construction of this airport, contemporarily, it is the second busiest airport in the country after Oslo International Airport. Hosting approximately 6,306,623 passengers in 2018. The state owned-Avinor operates Flesland, until 1999 Norwegian Air Force’s Flesland Air station was co-located at this airport. Some of the most significant airlines operating in the city are Scandinavian Airlines, Widerøe and Norwegian Air Shuttle.

There are a total of three terminals on this airport; those are T1, T2 and T3 respectively. Currently, the oldest terminal or T1 is now used as a helicopter terminal. The latest terminal or T3 constructed in the year 2017 and the other terminal, T2 the gates of which are C, D, E and F are interconnected at the Airport. The two levels of people are the first level also known as the arrival level where domestic and international flights arrive and the baggage claim area, you can also take numerous transportations from level one. The second level is known only for departures. 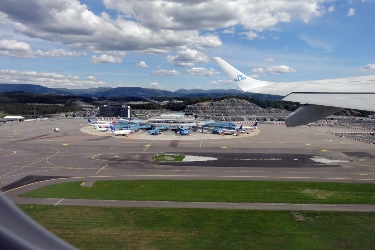 The lounge is known as SAS Café Lounge which will help you with free WiFi, and snacks. Other services at the airport include ATM machines for cash withdrawal, Baby care facility to nurture your little ones, shops and restaurants to satisfy your taste buds with the best regional food and grab souvenirs for your loved ones. The duty free shop will bless you with the liberty of picking up whatever you want to without worrying about the additional cost. The free WiFi facility is provided to entertain you in case of any delay in your flight.

After landing on this dream city, the travellers can enjoy the various modes of transportation according to their budget, need and the amount of luggage they are carrying such as bus, trains, metro. While public transport facilities like busses, trains and metros can prove themselves to be easy on your pocket, it will be nothing less than a challenge to travel in a mode of transport with a hurly-burly environment.

Private transportation is the best way to reach directly to your accommodation without worrying about travelling amidst the sweaty passengers or taking various vehicles to finally crash on that sumptuous bed. One additional perk that the passenger can enjoy while opting for Rydeu is that we provide the exact estimation for the pre-booking and the easy payment method to assure a laid-back trip to all the explorers out there.

To slip into the arms of Mother Nature, escaping from all the burdens for a while rejuvenates our soul. If you are looking for unruffled Bergen Private Airport transfers, explore Rydeu’s services to select the best option as per your choice and experience the best Bergen airport transfers. Book a taxi from Bergen airport to the city centre and lose yourself into the ultimate beauty of the city and make memories that you can cherish till eternity.