Opened on16 September 1916 as a military airbase, the airport now provides worldwide connections. Operating as a ‘one-terminal’ airport, all the departure halls are in one building. This terminal building has three floors with each floor having a distinct function designated levels 1, 2 and 3. The terminal originates from the central shopping plaza in the airport, Schiphol Plaza. 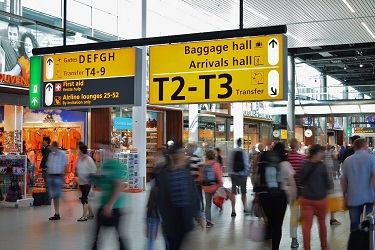 The ground floor is exclusively used for arrivals where it is connected to a parking area P1 with a tunnel. This level has baggage storage, locker facilities, restaurants and information desks.

The first floor of the Schiphol Airport is used for departures and it has four departure lounges. There are eight departure gate facilities named B-C, D, E, F, G-H and M. It also has bars, restaurants and a children’s corner.The second floor has first aid centers and passenger amenities. Piers also known as concourses connect these different floors. The airport has four concourses.

For private business jets and small aircrafts, a specific General Aviation terminal was opened up in 2012.The airport has six runways, with the newest one which opened in 2003.The baggage handling is made efficient by the usage of robots. The ‘Baggage on Demand’ concept includes the process of storing 4200 bags using fully automated baggage buffers. Then, six robots load all the bags into containers and carts. This system is designed to handle 70 million bags per year.

Enjoy a stress-free journey between the airport and Amsterdam with Rydeu’s reliable transfer service. Rydeu provides a one-step solution to all your problems with its easy and hassle-free experience. Transfers from Schiphol Airport have never been easier!