Aarhus Airport       |          Image by kitmasterbloke from flickr
Approximately 36 kilometers from Aarhus, is the Aarhus airport. The airport was, interestingly, built by the German Air Force in 1943. Until the 1990s, the airport was used by the Danish air force and its allies as  a war base. The airport still has a section dedicated to military training exercises, with the last exercise having been conducted in 2007.

The airport has two runways, and caters to approximately 5 lakh tourists and travellers every year

The airport is really small, and does not have a lot of facilities, albeit, it is sufficiently comfortable for the tourists!

Overnight stays are not available at the airport. The terminal is operational 90 minutes before the first flight is to depart, and is shut down approximately 30 minutes after the last flight arrives. 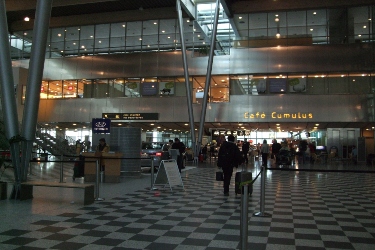 Don't worry much! It is not like the airport will not keep you entertained at all! On its airside, the airport has beautiful gardens with water moving in small waves, as if it's thriving to touch you! The gardens have gorgeous plantations, which you can peacefully stare at without a care in the world!

There are a number of transport facilities for travelling from the airport, lined outside the arrivals. From airport buses and trams to self-driven cars and private taxis, the tourists will never have to sweat a single drop at the Aarhus airport!

All in all, Aarhus airport is a small, cozy, and convenient airport, which does not keep busy, and caters to the needs of the tourists and travellers well.

When treading into a foreign land, planning ahead is of prime importance! Nobody wants to stress on a vacation or jeopardize the safety and comfort of their loved ones. The chaos of an unplanned arrival at an airport is not unheard of!

Don't worry! You can easily avoid any potential mess or mishap by planning ahead and planning smart!

One of the key plans that you need to make prior to kick starting your journey is for pre-booking the airport transfers!

Pre-booking airport transfers has its own benefits! From getting early bird discounts to a stress-free vacation, planning ahead would never harm you!